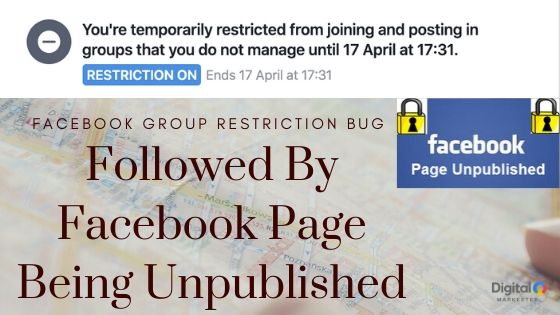 Thank you for reading another article on Digital Markeeter. So a few days back I read this news on twitter

And I was like yeah you could not be more wrong about that. By that I mean Facebook does not care for its small business partners.

In most articles on digital markeeter, I have shown clear concerns about facebook’s artificial intelligence and algorithm. And it seems like due to COVID 19 issue facebook is relying heavily on the above two features that they have developed.

And there is nothing wrong with that only if they work fine. The issue with Facebook is that it gives a very clear impression on its smaller business partners that they don’t care much about them.

And it has become more and more clear over the years. Facebook is continuously becoming a place more suitable to brands rather than small businesses and individuals Because their requirements are becoming harder and harder to achieve and on that they have this Algorithm which is designed to be anti businesses.

I say that in a sense that it is designed to detect the smallest issues and take very strict actions on it. Now it’s important for a user reading this post to know how authoritative information is. As digital markeeter i have never been to facebook office or have been able to contact any representative face to face over call etc.

But as digital markeeter admin, I have been a business partner with Facebook for over 8 years now. it has been really good sometimes and really bad sometimes. So our experience taught us a lot about the working of the Facebook platform and because they are never clear and don’t pinpoint your mistake, therefore, we try to find out the reasonings for their certain action based on how we were doing and where could we have gone wrong.

So it’s up to you if you want to categorize this article as an opinion or authoritative piece of information. At digital markeeter we do believe at this point we have some kind of authority especially related to Facebook pages.

I received this restriction notification daily. for the first few days, I ignored it and I did not take really take it seriously. but after 2-3 days I started taking it seriously and knowing Facebook I knew facebook already bans accounts without any reason but now if I don’t report it I might get into issues later.

The first time I reported they did nothing about it and I kept reporting it for about 4-5 days regularly but to this date, I never heard from them about such bugs so they kept ignoring it.

And then something happened about which I was concerned the most. Losing my Facebook pages.

Now over the years, this has happened so many times that now I am able to handle the shock and always whenever this happened we reviewed our mistakes and hoped to correct them so this does not happen in the future.

That’s how it is right? You got to move on!

So always, I have been able to find mistakes that could be corrected in the future and I would stop getting into such issues.

But this time it was different From the past two years as Facebook became really strict therefore I have been very careful in managing the Facebook pages and it has worked satisfactorily since then.

Now note I was reporting to Facebook about this exact thing and I was telling them a week before that this is going to happen on my Facebook account so please resolve it.

But strangely they ignored it all. So once the pages were unpublished I appealed through chat and email and I provided all the proves which made my case really strong and from the naked eye, it was very clear that it was a bug and I was not doing anything wrong or suspicious on my Facebook pages.

Now also note that I was not monetizing one of the pages also and I was just posting the general content related to page category to keep the audience engaged.

What our team at digital markeeter believes is that it was a false positive. Meaning the artificial intelligence of facebook’s algorithm was triggered because of something and we also have an idea what would have triggered this so that would be added in tips sections below on how to avoid your Facebook page being unpublished in such situation or even how could you avoid getting stuck in such situation at all.

After the pages were unpublished, we were actually confident of successful appeal because it was clearly a mistake. although facebook’s appeal acceptance history was never good and we were actually expecting them to react exactly how they did.

So after the appeal, it took them to review over a week probably due to the COVID-19 issue. So we received a reply. and it said

We reviewed your facebook page and we cannot resinstate because your pages don’t follow the community standards.

What Did They Review In Appeal?

I believe Facebook pages were initially published in error but upon review, they took into account posts 2-3 posts on each of my Facebook pages and their decision was basically based upon that review.

Now what’s really concerning is that does it not matter if you have improved over the years? in the past two years, there was not a single post on the pages which violated Facebook terms. but the posts they found where older.

What To Do Before Appealing?

Before appealing against the decision skim your whole page and delete any posts that might go against the community standards.

Although, I knew and had heard that it matters but I was so confident about the page being unpublished in error I did not think upon review they will be going to so deep and consider minor details to keep the pages unpublished.

it was almost like they were looking for excuses not to publish the pages again.

Now the most concerning point is that your efforts not being considered. What put me really off was that the page performance in the last two years was ignored and instead they based the review upon the posts that we’re posting at the very start of those Facebook pages.

Now everyone makes mistakes in starting to grow their audience.

What Triggered Facebook’s AI To Unpublish The Pages?

The first two options are the most important according to me which could have triggered the ai to unpublish the Facebook pages.

location surely created issues as I have been traveling a lot recently to different countries.

Different Wifis In the Same Household

Now, remember I did not change location on the second point.

This is also an important one. I had multiple pages on a single account and only these were performing the best and I was really working great.

I developed a strategy to gain organic likes without violating the Facebook terms and condition and the page which performed best was one also unpublished. So probably algorithm took that into account as well as they might suspect a page growing fast is suspicious activity.

And then I had many pages on the same id and this might have been detected as like farming facebook account which it is not for sure. but this most probably would have played some role as well.

Second, generally triggers when you are doing good on your page. for example, it engages the users and you are also monetizing the page. Normally monetizing that page triggers it quickly. I had verified with id before but it triggered again and it was followed by the issues pointed above.

Recently I decided to give Facebook ads another go and this time it started showing some results. In the meantime, I traveled to another location and one day I woke up with a business manager ban which meant all my ad accounts were banned also.

I suspected it was because of location change as I was following the guidelines and upon review, Facebook reinstated my business manager account. But surely location change triggered it.

From at the end of last month, I started getting this restriction notification every other day. Now how would I be sure it was a bug? or a false positive?

Because I never ****king joined any groups or posting in groups in the past 3-4 months at least.

I pointed out this bug to Facebook support about 1-2 weeks prior they unpublished the pages because I knew what’s coming next.

Because artificial intelligence and algorithms work in a general formula of if this then that therefore because Facebook did not resolve the issues on my Facebook account for getting the wrong notifications for quite a long time, therefore, losing pages were expected and it happened exactly.

Unfortunately, not only facebook’s AI is not perfect but its support is really poor also. They look for reasons for rejecting your appeals instead of trying to help the customers. Therefore it gives a strong impression of Facebook not caring about its customers.

The account is fine so far but as Facebook has not resolved the bug issue, therefore, it is a serious possibility now.

Although now I am in touch with a Facebook support agent on a regular basis and I am still trying to make them believe there is actually with my Facebook account of receiving false restrictions.

But I am still getting the restriction notification and if that does not get the account deleted which is a real possibility now but at least it can cause losing more pages at least.

How Facebook Support Responded So Far On This Issue

Facebook support works in two tiers. Tier 1 the support agent which is available on the chat you explain your issue to them and they convey that message to tier 2 support which forwards their decisions to tier 1 support agent and he then forwards you to message received.

And we believe our actual concerns were not delivered appropriately to the main support guys who are making the decisions.